Anyone got the time? 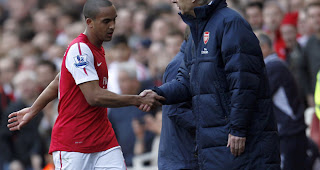 People have accused me of ‘only writing when we are winning’ but the truth is, I have written a fair bit over the past few weeks but just have not published it.

After coming back from Milan, the positivity had vanished for a few days; the future did not look so bright and serious questions over the clubs future were being asked.

One result (one superb result) against Spurs does not make it all okay but it gives the club and supporters a boost. It gives Arsenal a chance.

Fourth place is absolutely vital and now people understand that financially not getting to the Champions League would mean the profits announced today would effectively be used to cover the champions’ league failure, it shows the importance of yesterday’s win. The cost of not getting in the Champions League is roughly 45m and that comes from participation in the CL, TV money, commercial deals (a club in the CL will get more then a club not in it), match day revenue (people will not want to pay top prices to watch football on a Thursday night) etc.

The Spurs game was epic. Even as an admirer of Arsene Wenger, the mental strength he often talks about is sometimes invisible but yesterday the whole club showed great mental strength. The players fought for every ball and worked so hard. Sagna’s header told me that the players were up for it. Sagna wasn’t afraid to get hit and was fully committed in winning the header and he deserves his goal and even added an assist.

Theo Walcott who seemed to get stick from the first minute kept his critics quiet with two superb goals. I have also maintained that along with great pace, I believe he is a good finisher. Finishing does depend on confidence but Theo has the quality in my opinion however, teams are starting to play deeper against him because they fear if he gets behind them, there is no catching him and this means in certain games he will be less effective. At the age of 22, I hope he will develop a plan B to counter this.

Rosicky and Yossi were also superb. Rosicky has been very good over the last month and deserved his goal. Yossi kept working and as supporters, that is all we want. It was a huge call from Mr Wenger to play Yossi ahead of Chamberlain but it worked a treat.

Next week at Anfield is a huge game again but hopefully our momentum will continue and we can get the three points there.

The fans were superb on Sunday and just kept going even at two down and that sort of support makes the Emirates an amazing place. I am sure the away section at Anfield will be the same as it always is when Arsenal are in town!

Ps. Arsene Wenger’s having a party!!

Posted by Akhil From Hounslow at 23:53 1 comments 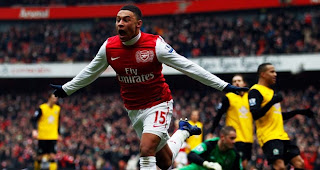 0-2 down at home to Aston Villa in the FA CUP and I really did fear the worst.

Fast forward a week and we came back to beat villa, got a draw away at Bolton and put seven past Blackburn at home.

I guess we will really learn what this Arsenal side is about next Saturday when we go to the Stadium Of Light; a win there and maybe a small corner has been turned. Sunderland is a hard place to go specially in recent weeks.

The reputation of Alex Oxlade-Chamberlain grew further and there are cries of him being included in the England squad for this summer's European championships.

Theo Walcott, who in my opinion is sometimes a bit of a scapegoat had a terrific game with three outstanding assists.

Robin Van Persie may have scored three tap ins HOWEVER, the movement he has in the box is something really special. His movement is so intelligent and its not by the luck of god that he is often in the right place at the right time.

Up The Arsenal !
Posted by Akhil From Hounslow at 11:38 2 comments