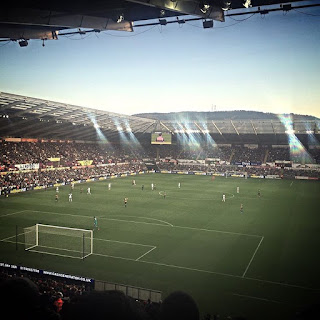 (Swansea away from the away end)
Arsene Wenger recently talked about breaking up the first half of the season in parts. Using the international breaks as dividers and setting targets for these periods.


Arsenal currently sit joint first (I prefer to say that then second – it’s currently joint first but turns into second on the final day of the season) and their Premier League form has been pretty good. Good wins against Manchester United at home, Swansea and Palace away being a personal highlight. Frustrating games against Liverpool and Chelsea where there is still a sense of disappointment and slight regret.


You can draw as many conclusions as you want this season but the one I have come to is that if Arsenal are to maintain a title challenge, then injuries (or hopefully the lack off) will play a huge part.


In fact, injuries will determine if Arsenal maintain their title challenge – despite not buying an outfield player (which 99.9% of supporters were at unease about) the squad, if fit, look in good shape. There is the worry about Francis Coquelin but if you look at the team that played at home against Spurs, you would say at the very least, three players would come into the team – Bellerin, Ramsey and Walcott (perhaps two if Giroud plays upfront) but the main difference would have been the bench. The strength on the bench was nowhere near where it should be and having a few players back would have resulted in Ramsey or Wilshere coming on for Santi with Bellerin for Dubuchy (although, Bellerin would have started if fit) and the Ox, Theo or Welbeck or even Rosicky (if he ever comes back) on to play the Gibbs role.


The Bayern Munich game at home was a great example of what you do with a half decent bench. Theo Walcott was running at Bayern the entire game but Arsenal had Giroud to come on to provide a different option; but one with quality (rather than throwing on a Bendtner or Sanago like we have in previous years). Similar when Aaron Ramsey pulled a hamstring, Arsene Wenger could call on Alex Oxlade Chamberlain to come on rather than our second choice left back (who we love at the moment after his leveller against that lot’).


Our next game is away to West Brom and our squad of 18 should include Bellerin, Ramsey and Chamberlain and a fully rested Mesut Ozil who has not been called up for Germany. They probably recognise he needs a rest and it's a perfect situation for us. Alexis Sanchez does remain a worry and we pray he gets through the internationals but looking ahead, I wonder if the temptation to rest him against Zagreb (I know it’s the Champions League but….) will be there or perhaps the home game in the league to Sunderland in early December but he looked exhausted on Sunday in the last 20 minutes after a tough week.


The injury to Theo Walcott is the one I’m most interested in – I thought he was developing very well in the centre forward role and along with Giroud provided us with two very good options. We may not have a worldie but in Giroud and Walcott, they could just perhaps, score enough goals to give us a shout in the one we all want - the Premier League.


But for the love of god, please no more injuries.