Title Race As I See It 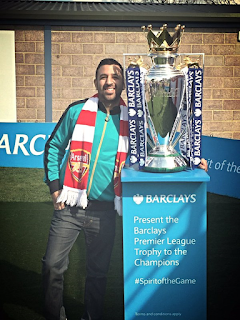 Having spent yesterday morning with Leicester and Spurs fans, it was evident that Leicester fans do think they will end up as champions this season. Mind you, the scarfs were a good giveaway on Sunday.
It’s clear that the title IS Leicester’s to lose.
Seeing and speaking to Ian Wright yesterday gave me an insight on how a footballers mind should be working – realism that it’s Leicester title to lose but at the same time, remembering that football can be a funny old game and if they were to slip up (he doesn’t like the word bottle it!) and Arsenal didn’t take advantage, that would probably hurt more than not being in the position to win it in the first place.


Another ex pro, who has won the Premier League title as an underdog was Alan Shearer for Blackburn who also gave his view a few days ago – he said even though he believes Leicester will win the title, they WILL start feeling the pressure in the last 5/6 games when everyone believes they have done it as he did with Blackburn. He went on to say that Blackburn were lucky others didn’t take advantage.


For me, giving up isn’t an option – why would you? At the worse, we should finish second – finish below Spurs? Behave. We are one point behind them IF we win our game in hand at home against West Brom. ONE POINT! I hope the players and manager and everyone who interacts with them keeping banging the drum about NOT allowing Arsenal to finish behind Spurs. Can you imagine that, Spurs going for the title, in their best season ever in recent seasons yet finish behind Arsenal. Small consolation on missing out on the big one for us but one I rather have then not have.


I think if we do miss out on the title, there should be a post mortem, that should include the performances of every player, every major decision of the manager, the performance of the board / major shareholders but that post mortem should wait until the season is over.


Going back to what Ian Wright said yesterday about the club – he was asked ‘Why’? Why we fell apart, why we seemed to ‘bottle’ key games? – his answer was fairly simple, ‘Mentality’. He was strong in indicating that he doesn’t think changing the manager is necessary what is needed but for the manager buying a few players with leadership qualities and that winning mentality that is so key to winning league titles. We have the odd one, but need more and I don’t think many Arsenal fans would disagree with him – yes many of them may want a change in manager TOO, however, will not argue on the mentality / leadership front. Wrighty remembers when Dennis Bergkamp first came to Arsenal and had Adams, Bould, Dixon, Seaman etc around him, that made him stronger despite already having a winning mentality.


The way Wright spoke about the club was a joy to hear and I hope the players can show similar passion in the remaining games – we have seven games and we want seven wins.


You know what, Leicester probably won’t slip up despite having some tricky fixtures against Manchester United and West ham but for God sake Arsenal, please win your games….just in case.