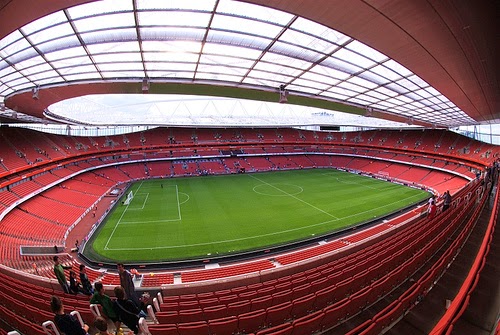 Have you ever spent weeks and weeks getting excited for something, only for it to turn out to be utter shit? Well, for millions of Arsenal fans yesterday afternoon, that was exactly what we got as our team found themselves 4-1 down to Liverpool an hour into the new Premier League season.

And to think I even made the mistake of saying we actually looked comfortably for the first 45 minutes. We were dealing with long balls comfortably and were pressing well to win the ball when Liverpool played on the ground. Then, out of what seemed like nowhere, we were 4-1 down. It can only happen at Arsenal.

How on earth we allowed Alberto Moreno the chance to stay on the pitch by not testing him at all in the second half is beyond me. In the first half he looked utterly lost in the left-back position, giving away a penalty and going for a walk for Walcott's opener - why oh why did we not attack him more?

The Wenger debate goes on

I was asked last week if I was "In" or "Out" as part of the biggest debate capable of matching the recent EU referendum. Funnily enough, I'd never actually been asked this outright before - most people tend to assume that I'm part of the "Arsene Knows Best" crew because I don't spend much of my time talking negatively about our manager. The actual truth is that as much as I want Mr. Wenger to succeed - just as I would want any Arsenal manager to do - I'm very much open to change, despite my enormous respect for him.

After 20 years, change should be embraced and not resisted and can bring on a number of positive benefits, but in the short term, I'm always going to want to see my club win football matches. What does that make me? An Arsenal fan! I doubt my match day routine would change whatsoever if the manager changed - it'd continue to consist of a trip to the cafe, the pub, the game, and back to the pub, with a whole lot of chanting going on throughout as well. In truth, my experience as an Arsenal fan stretches far beyond discussions over whether or not the manager should be given the sack or not, and I find that it often serves to be a way to start arguments over Twitter and online. I'd rather be left out of the debate.

The way we have gone about trying to sign a centre-back has confused me - we seem to have identified one we like the look of, but we still seem far away from actually signing him. In a recent episode of the Gooner Ramble podcast I hosted, we had a journalist on who explained the inner workings of these transfer deals and what things have to happen before they're finalised, and how clubs would often use third parties to first establish the viability of any potential deal. If positive vibes came their way they would then seek to make things official, and by-and-large the Football Manager-style of placing a bid and only then offering a contract to the player isn't that true to reality.

This indicates that Arsenal had received those good vibes after feeling out any potential deal for Jamie Vardy, but after activating the release clause in his Leicester City contract, he likely had a U-turn that meant the deal didn't go ahead. Whilst this likely wouldn't have happened in the Vardy deal, the delay could also be because the buying club is spending too much time haggling in order to pay as little as possible. No-one wants to pay more than they have to, but in football it's not as clear cut as that - paying slightly more for a centre-back, for example, means the likelihood of getting a good result in the coming games improves if the player can have a positive impact, and with that in mind the value of doing the deal early should surely appeal.

It's also possible that the delay is caused by the selling club wanting to line up or sign a replacement before they sell their man. There's no coincidence that Swansea City were able to announce the signing of a replacement for Ashley Williams after their captain moved to Everton, meaning the deal likely wasn't totally finalised until Swansea had their man lined up too. Still, whatever the reason for the delay in Arsenal signing a centre-back - or a striker, for that matter - the club have had more than enough time to fill both positions, and just as I thought back in May, I still feel we're in desperate need of improvements in this area.

Players and their summer breaks

One thing I do worry about is when the club might bring players back into the first team too early, leading to poor performances and injuries. We saw on Sunday what can happen - Aaron Ramsey, who had played in only one game during pre-season, went down with a hamstring injury and now looks set to be out for a month. There's been a lot of debate about this topic as Mesut Ozil, Laurent Koscielny and Olivier Giroud were all absent from the Liverpool match due to their late returns to training, to the aghast of many. Cruelly enough, Wenger went for a bit of both and we suffered badly - we missed the players who were absent, but the one who did play got himself injured!

I firmly believe that it should come down to the respective individuals and their own fitness regimes, depending on their bodies and their workloads. Should a centre-back need as much rest as an attacking midfielder, perhaps? I've no idea as I'm no fitness or physiotherapy guru, but all I do know is that, if possible, I would have loved an experienced centre-back in the team and it was tough to see Koscielny watching from the stands as Calum Chambers and Rob Holding struggled to cope with Liverpool's second half onslaught.

Either way, it's clear to see that yet again we are unprepared for the start of the season, and it has already cost us three points. We still have 37 games to go but this lack of preparation could be the difference between 1st and 2nd - or 3rd, 4th or even 5th. I wouldn't go as far to say that we're in the midst of another crisis but the club need to act and act fast. With a trip to the champions Leicester City next weekend, we could still be waiting for our first points after two games. It seems almost unthinkable for us not to sign someone - although I said the same this time last August - but if we don't, then we might be at our lowest point for some time. It's tough to think about.

Back in 2013, we lost 3-1 at home to Aston Villa on the opening day of the season after a summer of inactivity and things became extremely hostile. However, we responded by beating Spurs shortly after and signing Mesut Ozil for a club record fee on deadline day, and that boost gave us the impetus to go on a winning run. We're not playing our greatest rivals just yet, but we are playing the defending champions in their own back yard, and right about now would be a good time to start winning. The excuses are wearing thin, and perhaps pressure from the fans will force the board and the manager's hand, but has it all been left too late?

Time will tell, but nonetheless I must make this plea to my beloved club - do not let things drift, or more and more fans will become disillusioned. We thought we'd moved past this toxicity after two FA Cup victories, but we're in danger of stagnating again. It doesn't have to be this way though. There's still time to get the fans back on board, to believe again, but it's running out quickly.