Time To Give Giroud Some Credit? 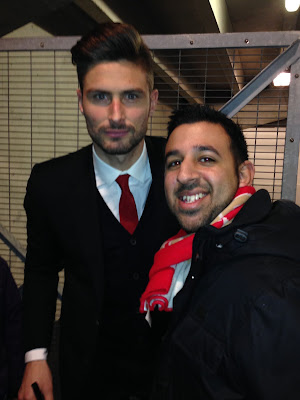 This has a nice feeling about it – so often I’m writing about ‘my’ players like Mesut, Theo or Lolo and often having to defend them (certainly Theo!). It’s nice to write about a player, who I have no deep weird man love for, despite his charming good looks! But, please, Olivier Giroud, take a bow. You deserve it, son.


He is a player I’ve always liked and thought he was a valuable member of the squad and has taken some stick in his time.


I tweeted about the big man in November, after his leveller at Old Trafford:

…And I firmly believe this is still the case.
For years, Giroud was a scape goat and one of them reasons, in my opinion was because he was seen as the replacement to Robin Van Persie. In reality, Robin Van Persie was replaced by Giroud and Poldolski to share the workload and goals. It was a mighty difficult talk but as we look back, we should be praising him and the club and manager deserve credit in signing a player for 12m who is about to reach 100 goals.

He, up till this season, has been playing up front for as long as I can remember, on his own, with no real support. Poldi came and tried, as did Theo but no one ever was in the same bracket as Giroud in that role.
Alexis has now shown himself to being a striker, or at least been giving the opportunity to shine there which is actually helping Giroud. He now has competition and some real competition, he needs to perform, unlike before, when he was the ‘ONLY’ option, he is now ‘A’ option.

I also don’t think it’s a role Giroud minds – when Arsenal were linked with Luis Suarez, Giroud said this:

"When the name of Suarez was circulating, I honestly thought it was a good thing for the team. We could have complemented each other," Giroud told  L'Equipe .
"Suarez would have been a cannon... and he can also play out wide."
However, Giroud didn't look quite so fondly upon the chase for Real Madrid forward Gonzalo Higuain.
"It would have been difficult for me with a different player. "We (Giroud and Higuain) would have been in direct competition because he is a pure central striker. Of course, at the time, it would have bothered me a bit. But I was not afraid of competition."
It’s clear that Giroud wasn’t keen on being replaced (naturally) but was keen to get a ‘different’ type of player and that player didn’t end up being Suarez (due to Arsenal’s stupidity) but has become Alexis (due to Arsenal shrewd top summer signing)
Once Walcott and Ozil are back (which they should be on Saturday) it means more depth and options up top. Giroud may, like he has over the Xmas period, be expected to lead the line and perform or at times be expected to come on and make a difference like he did at Sunderland or in Manchester.

When you look at rating signings, you look at the quality of the player, the length of service, the price, the wages and make a judgement and in all those aspects, Giroud has been a fantastic signing.

Let’s give him the credit he deserves.