Future of football with broadcasters... 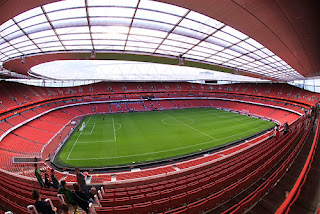 With Amazon joining the party with Sky and BT, the future battle for TV rights is getting very competitive. Amazon has won the rights to show 20 games from next season but only over two match days. Boxing Day and another bank holiday will see Amazon have the rights to show every game from the two days to their subscribers.   The package was known as ‘package F’ which is relatively low on the priority list for TV broadcasters with package A (Saturday 1230 KO won by BT) and package  B (Saturday 1730 KO won by Sky) the most popular followed by Sunday games.
Amazon’s thinking will be to get their foot in the door with the main objective to increase their customer base and Premier League football has that global interest that only football has and the opportunity to get involved would have been difficult to resist.

Amazon do give free 30 day trials and many may begin the trial around the Christmas period in order to get the boxing day games and some may cancel after but many will continue which will fulfil Amazon’s objectives of increasing their customer base.

The late KOs potentially pose transport issues with trains often not running a late service which may make it difficult for away supporters to get back to the part of country they are from. This may also mean some awkward conversations within families with some wanting to go / watch football with others not so keen.

We calculated that last season; Arsenal only had about 5/6 traditional 1500 KOs. There are currently Friday night KOs (that are very difficult for travelling fans), Saturday 1245, Saturday 1730, soon to come Saturday 1945, Sunday 1200, 1400/30 and 1600/30 and Monday 2000 KOs and many games are moved for TV coverage which means supporters have to wait until about 6 weeks prior to know when and where their team is playing which makes it very difficult to plan their own lives.

With Amazon being a less traditional place to watch football, it may mean others get involved. Twitter had some NLF coverage which moved to Amazon and Snapchat had sport highlights which may result in more social media platforms and online streaming companies get involved in football and push Sky and BT to the limit. The ultimate result for supporters may be to have multiple subscriptions in various places in order to watch their team which could prove costly.

As much as we all love the beautiful game, the cost for supporters via TV or attending matches is out of control which match ticket + transport costing a small fortune and potentially forcing families to make a choice and potentially putting football before other priorities.

Will it get better? My guess is that it’s only just beginning…