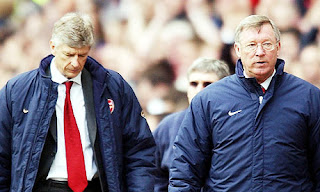 Let’s be honest, the last two weeks have HURT! Make no mistake about that.

It did feel like the end of the world on Saturday, seeing us go out of another competition and seeing Johan Djourou’s season ending.

I don’t know if we are going to win the league but what I do know is we are still in the title race and are in a good position.

I took a few days away from football (because of recent results and also coming back from Manchester with a bit of a cough) and thought I would just re-think things.

I’ve come to the conclusion that without Johan in the side and playing with two centre backs in their first full season at Arsenal, we will inevitably concede goals. The two were outstanding away to Sunderland and hopefully that sort of fight will return but you cannot help thinking we will concede goals purely because it’s their first ever season in the Premier League.

With that being said, I always feel Arsenal have enough to outscore opponents. After the international break, Cesc and Theo should be back to join Robin, Sammy, Jack etc and offensively at least, we are not missing anyone. Alex Song too is a must; we need him back and with Johan out, Song’s presence is even more vital.

The WBA game comes before the international break, so if we can scrounge out a win, we have a bit of time to get the likes of Cesc, Theo and Song fit. WBA is a huge game and after the past two weeks, nothing but a win will do.

Aaron Ramsey may have a part to play too; he looked bright at Old Trafford and has had some good time on the pitch on loan since his injury. Rambo is undoubetdly a massive part of Arsenal’s future but I think he may play a part this season and be a bit of a surprise.

If Arsenal are to win the league, some players need to step up. Some players may even be playing for their futures. I will not name names but everyone has their own opinion on who should perhaps go at the end of the season or those who just need to work harder.

At a time when ticket prices may continue to increase, player’s wages will be highlighted and therefore players who do not give 100% will not be given much sympathy. The players in the squad MUST show real desire if Arsenal are to win the league and can take a leaf out of the Jack Wilshere book. Every time he puts a foot on a football pitch, he plays with such heart and commitment, that’s what everyone needs to look at.

As a supporter, I feel I have my part to play and that’s to keep supporting my team, I will not talk for anyone else because its not right for other supporters to talk for fellow supporters and at such a emotional time, for me, the best way to channel my emotion and even frustration is by going to WBA on Saturday and singing my F****** heart out!!

See you at WBA.

Posted by Akhil From Hounslow at 12:51