Arsenal Beat Spurs And Liverpool? Your Having A Laugh 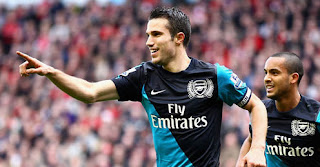 As most people were aware, I was given the chance to be on Sky Sports Soccer Saturday a week and a half ago.

One line, that I said was not shown on the programme was about how Arsenal CAN beat Spurs and Liverpool and even push for third position in the league. At the time, it looked far away. At the time, we had just got back from Milan and Sunderland and we were fearing that losing the two games would mean the end of the road in terms of getting fourth place.

Fast forward a week and a half and people are actually talking about the impossible being...well maybe possible tomorrow night against Milan.

Its amazing how quickly things change in football.

Do I think we can beat AC Milan tomorrow? Off course I do. Will we do enough to go through? I have no idea; but I would like to see the 11 lads on the pitch give it their best damn shot.

If we do it, then great, If we do not but put in a performance then I think we can all be proud.

Once again, its amazing how quickly things change in football.
Posted by Akhil From Hounslow at 19:06