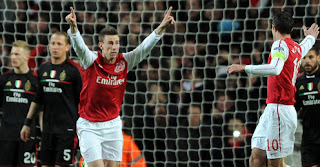 So close yet so far.

We nearly did the impossible and I think everyone went away from the Emirates extremely proud of our boys and manager the other night.

The players have given their all in the last three games and perhaps just lost their legs a bit in the second half against Milan; but the way they fought was a credit to the club and they played for the shirt.

The manager must take credit for the last three games too. Against Spurs, he played Yossi and kept Theo on when he could have easily used Chamberlain from the start (rather then Yossi) or as a sub for Theo but the Yossi and Theo (second half) had outstanding games. Against Milan, he went for it (perhaps he did not have much choice with the players out injured); many thought Theo may play more upfront but Chamberlain was chosen to play in the centre of midfield and he was simply brilliant. What a player he can become and what a coup it was for Arsenal to get him in this summer.

Lets keep this going by beating Newcastle at home on monday.

Up the Arsenal!
Posted by Akhil From Hounslow at 11:42