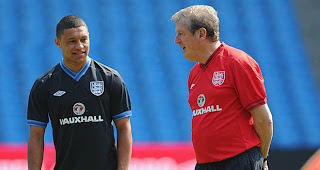 So we all saw it, a certain Mr Arshavin ran the show on Friday night and many Arsenal supporters were wondering where this little Russian has been for the last year or so.

I have always been keen to keep faith with Andrey Arshavin but something clearly was not right last season. Perhaps his loan spell has just recreated that form we saw when we bought him.

I find myself having real issues and creating bonds with players and wanting to believe that they will come good and that has caused me a lot of heartache at times but with Arshavin, it may be worth the risk? It will be an interesting summer, if he has a good tournament overall, would it be silly to get rid of him?

We saw our keeper not exactly get off to the best start, we saw our new front man miss a sitter and saw our big German defender back named as a sub in the space of a few days.

Today we may see Alex Oxlade Chamberlain start for England and many have asked the question, what does this mean for Theo Walcott?

I think Theo Walcott had a very good season and his goals and assists record speak for it itself however, I think playing Chamberlain tonight may be a fantastic move. Without Rooney, England will have to try and make the most of the ball when they get it against a very good France team (on paper anyway) and perhaps Chamberlain is in a better position to do this. I would have loved Theo and Chamberlain to start together but I can understand why Milner will/is chosen (I cannot say the same about Downing though!).

I think Theo has a big part to play tonight and in the rest of the tournament and think the 6/1 odds of Theo scoring tonight at any time or 14/1 to get the last goal (even as a sub) is well worth a punt!

For once, England does not expect, and that is not a bad thing. Come on England and off course, come on Chamberlain and Theo!
Posted by Akhil From Hounslow at 14:41