The man who the supporters are spilt in the middle about: 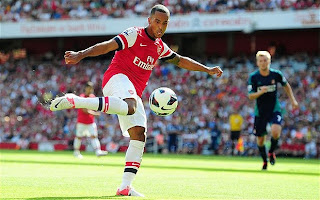 There are not many players that bring about different opinions as much as Theo. Alex Song was a closer second in my opinion but I have always had ‘debates’ about Theo Walcott.

From feeling very uncomfortable in the first half of that Spurs game while listening to the groans for every miss placed pass to the whole ground singing his name after scoring two important goals to make the game safe for Arsenal, I have always been an admirer.

I will be up front about this; I want and hope Theo Walcott will stay.

At 23 years old, he has two big contracts left in his career. He is not 26 plus and does not have to go out and get the highest wage he can just yet (hopefully he never will). He has developed in my opinion at Arsenal and his statistics show this. He has been inconsistent but last season, I felt he improved and got a proper season without injury under his belt.

Is 75k a week a fair deal? I think it is. But the trouble with football is, what we think is a fair deal, others may not and even if they do, they still have the resources to pay a lot more and not even blink.

I love the line about Arsene Wenger being the sane one but living in a crazy world rather then the other way round. I believe this to be true but as a club, losing players will happen more and more with the wages in this crazy world paid by other clubs.

Theo, unlike Robin, has a re-sellable value; that means, paying him a bit more now but being able to sell him for the same value or more (unless his forms dips dramatically) is an option. I’m not sure if I would pay him much more but if it’s the question of 5k maybe 10k or so, I would consider it because at 23, he has the potential to improve and if he does not, I am still convinced there would be a club that would take a punt on him in a few years.

Regardless, he certainly has not gone yet and I remain hopefully he will re-sign because as I have mentioned many times, I rate him; plus I would have to change my twitter display picture which is just too much effort!

Up the Arsenal…as always.
Posted by Akhil Vyas at 01:18