Another Day, Another Trophy - Now For The Big One 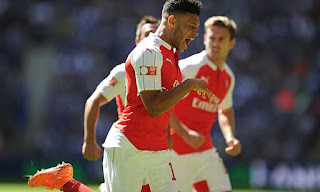 I keep reading it was/is a friendly or a glamorous friendly at best – I think there are 18 other teams in the league that would have LOVED to play the community shield; why? Because that means they either won the FA Cup or were champions of England.

It gave Arsenal the opportunity to go into the game at the bridge on September 19th with a win already under our belt’s against Jose’s Chelsea. It gives Arsenal a feel good factor, it gives Arsenal the confidence to know they can compete and beat the big sides and best of all, it makes the squad photo look better!

I couldn’t help but look at our squad and think ‘wow’. The strength in depth in MOST positions is unreal.

We have two right backs and you would be happy with either playing in Bellerin and Dubuchy and again with Monreal and Gibbs at left back. Gabrial and Chambers are good cover for our two centre backs. We have plenty of midfielders, perhaps lacking quality cover in the holding role but aside from that, Ramsey, Wilshere, Cazorla, Rosicky, Ozil along with Arteta and Flamini give us many options. Out wide we have Alexis, the Ox, Theo, Gnabry, Welbeck who can play there and up front, Giroud and Walcott will battle it out to be number one with Welbeck perhaps supporting.

You would think Cech, Koscielny and Coquelin will always start when fit purely because the competition in their position is slightly less and you would add Alexis to the list, not because of a lack of competition but because of his class and also his willingness to always want to play (He only returned to training today yet wants to play on Saturday and has been training in his own time in his holidays!). Aside from them four, you can really rotate the others to keep them fresh and with four competitions, that will be key.

I really believe Mesut Ozil is going to have a stormer this season and I must admit, I really enjoy watching him play. He has so much elegance and when on the ball, you feel something is going to happen. Arsene Wenger has challenged him to get more goals and I think he has taken up that challenge already in pre-season and beyond.

Bring on West ham on Saturday (predicting a bit of a rout, perhaps three or four goals and I wouldn’t be surprised if Ozil is on the scoresheet – In fact, my next stop is to the bookies to put some money on it).

Let’s hope we have a long and successful season – Up the Arsenal!
Posted by Akhil Vyas at 12:42