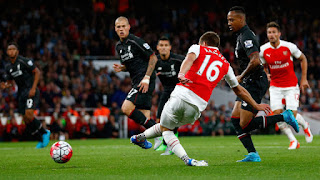 Another game, another goalless performance at home – it’s starting to be a concern; the easy solution would be to buy a striker (as everyone keeps telling me) or another solution would be to tell the strikers / offensive players we do have to actually score a goal or two OR ANOTHER solution could be to change things round a little and as Arsene Wenger says, find an ‘internal solution’.


Most shots but joint least number of goals isn’t a record we want to keep but as everyone always says, it’s reassuring we are creating chances – however, I would argue we are creating less then we normally do but I think that will come. Thankfully we have a world class goal keeper who showed just how good he is in Petr Cech.


The buying a striker solution or telling the existing ones to score does not need much in-depth thinking (If a top striker suddenly becomes available, I think Arsenal will ponce) but the famous internal solution is the one that many have been discussing on radio phones ins and off course on social media.
I’ve been a bit slow on this one and many have been whispering it for a while and perhaps it took me to get absolutely soaked (by the way, if you ever give your season ticket to someone near you so they can bring someone and get a ticket elsewhere, CHECK WHERE THAT TICKET IS – IF IT’S ROW 1-5 DO NOT TAKE IT!! YOU GET WET! VERY WET!....EVEN IN AUGUST!) to see that Santi Cazorla and Aaron Ramsey are struggling to fit into the same team at the moment. I think I was perhaps a bit naïve by thinking ‘if it worked at the end of last season, it will surely work again’.


Santi played out wide at home against West ham with Ramsey central but went back to the shape of last season at Palace – it seemed to work at times but perhaps was not as convincing as say it was away to Hull last season. Arsene Wenger has a real decision to make here as to what he does because both want to play in the middle and our two Subs yesterday, Theo Walcott (who incidentally has actually scored at home in the last 6 games in the league) and Oxlade Chamberlain wanting to play on the right -  yes yes, I know Theo has said he wants to play up top but what he actually said, was that ‘in some games, he may be suited to the right and in others suited to play up top’ – at the moment, I would say he just wants to play!


Having some natural width could be an internal solution on the right as we all know Alexis is best cutting in and coming inside from the left rather than playing as a ‘winger’. Arsene talked about how wide players need to work hard to protect their full back a few years ago and perhaps that is one of the big reasons why he is reluctant to play Walcott or the Ox in front of Hector Bellerin. It seems like the preference would be to play Hector and Ramsey or Debuchy and one of the two – similar on the left where Monreal has cemented his place but I wonder what would happen if the more offensive Gibbs came in for a run in the team. The opening game against West Ham did not cause this dilemma as Hector missed out with a knock so the OX could play in front of Dubuchy.


In truth, I could be talking totally out of my backside and I’m not sure what the thinking is but sitting there last night in the rain showed me that something is not right and the balance is not right – I honestly believe we have the players (I wouldn’t say no to one or two world class players coming in, who would?) but we perhaps just have not set up correctly to get the best out of them.


A must win on Saturday may just be followed by an international break of thought with a few tactical conversations occurring between the manager and the coaching teams – along with new player to fit into the side; time will tell.