Return Of The King? 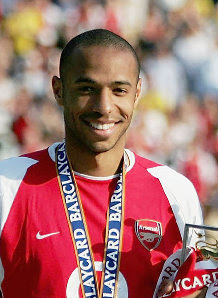 The argument of wanting to remember Thierry at his peak or not ruin his legacy is a fair one but I for one would risk Thierry’s legacy for a top four finish. I love Thierry; but I love Arsenal football club more.

Saying all that, I would much rather get that permanent striker in which will mean more support for Robin and perhaps show the ambition that Robin wants to see.

But even getting a permanent striker may prove difficult; a potential player will know he will play second choice to Robin and its not like we can pay them 200k to sit in the bench (unlike some; some even pay others to play for someone else but we will leave that for another day).

It’s a real dilemma. Podolski has been rumoured and that would provide a much longer term option and I would be happy enough with that. The downside to a short term replacement is that when March/April comes, Arsenal will need fresh legs and the Podolski type signing can give that where as the Thierry Henry signing cannot.

Being in the away section at Man City, I would have given anything to have Thierry Henry on the bench and bring him on for the last 20 minutes or so. He just offers something different and I know it was only pre-season but he did not look too shabby in the Emirates cup and has been training with Arsenal so only the club know what level he is at.

An Ideal solution would be to bring Thierry in along with a long term permanent offensive player and one that most would be very pleased about.

I know the romantic and emotional personalities among us do not want to see Thierry reputation tarnished but I would be prepared to take the risk if it gives an advantage to Arsenal football club.

After all; how can anyone forget Thierry’s 226 goals for this football club and in case you do forget, there is a massive statue outside!

And if he re-signs, what are the odds on a goal against Man Utd and Spurs at home in January and February respectively? Worth a punt id say. (If he does sign!)

Posted by Akhil From Hounslow at 01:50