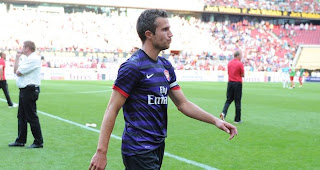 From speculation at the end of the season, to a meeting in Totteridge which led to a statement after the Euro’s to Mr Ferguson moaning about how Arsenal are dealing with their own player. The saga has dragged on and on.

Where will Robin Van Persie end up? No sod knows in reality.

Juventus have a few issues with their manager being banned for some sort of corruption; Man City has never been high up in preferences for Robin according to most and notably his own father and Arsenal do not seem to keen to sell to Manchester United.

Arsene Wenger has NEVER sold a player to Manchester United and you get the feeling he wants to keep it that way.

I wrote earlier in the summer (shortly after the statement was public) that I would want Robin Van Persie sold sooner rather then later and I still feel that way BUT selling to Manchester United, a team that we have been in such rivalry with would hurt the supporters. We all remember the battle of Old Trafford, Pizza gate and the infamous tunnel incident when Roy Keane and Patrick Vieira had a ‘heated’ debate regarding Gary Neville and Jose Antonio Reyes.

I wrote this summer but how keeping Robin after the statement has the potential to damage the morale that Arsene Wenger has worked so hard to maintain. I was concerned that Robin may start talking to others and just sulk his way to a move like others have done. But hearing bits and bobs from journalists and the media men internally at the club along with a few others, everyone is in agreement that Robin has been focused, has trained hard and has even been enjoying himself since he has returned to training and has been impressed with the new players that have come in.

Putting my bitter feelings aside (I just do not like people that disrespect the club I love) and thinking about what is best for Arsenal football club may mean keeping Robin. Apart from going to Juventus, there is no real benefit of selling on the cheap to the Manchester clubs. Off course, he could go to Utd and break down and be out for seven months but if we are counting on that, we really do need to get out more! Selling him to Manchester United can only have a negative impact on Arsenal you would think; you just do NOT want to strengthen a rival, especially a rival that you could compete with if results go your way.

If Robin is committed (even for a year) and is focused and plays well then keeping him can only be good for Arsenal football club. He may have to go through a phrase of ‘winning the supporters back’ but it was him who put out a statement, badly advised or not, that criticised the club, the manager and the new signings. If Robin’s statement was true and he is worried about the lack of direction then come December or January, if the new signings have settled down and Carzorla in particular has started well and Arsenal are in the hunt for top honours, then surely Arsenal have a chance of re-negotiating with Robin Van Persie and the chances of him signing a deal ‘should’ increase.

It’s certainly a tough call for Arsenal and having another manager moan about the way Arsenal are handling the transfer for their best player and captain who IS under contract does not help the cause but Arsenal seem different this summer, they seem like they are not going to let others dictate or bully them into selling someone at a lower price then what they have set and may just take the chance by keeping Robin, unless a bid they cannot refuse comes in, i.e 20m plus.

Whatever happens, the summer has been a positive one with Podolski, Giroud and Cazorla coming in and perhaps one or two more still to come in, so regardless of what happens with Robin Van Persie, I am quietly confident that this could be a season to remember for Arsenal football club.