First Leg Is Over And We Have A Lead 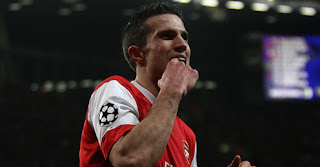 Ideally I would have loved a two goal lead but we were playing Barcelona, the best team I have certainly seen so just to have any lead is so positive.

As I said yesterday (when I was slightly over excited) that all I wanted was to be in the tie; lets be honest, Barcelona are quite special. The way they pass that ball around is special, there were spells in the game where we just couldn’t get it back and when we did, they pressed us so hard that we lost it again.

Then again, that spell near the end was equally special. I thought Mr Wenger made the right subs, Song was booked and taken off with the boss maybe seeing that we can afford to have all our attacking players on the pitch at once and it worked.

That second goal showed what Arsenal are all about! I think it was Koscielny that won it, who gave it to Bendtner, who gave it to Wilshere who first time gave it to Fabregas who then released Nasri who ran, cut back and laid on a perfect ball to Arshavin who finished it nicely! Five passes and we got from our box to their box and scored. That was just great to watch. I was happy for Arshavin too because it clearly hasn't been easy for him over the last few months and in recent games, he has given it his all so fair play to him.

The phrase ‘come off age’ was used last night and Jack Wilshere certainly came off age. We as Arsenal supporters always knew what his capable off, but others doubted. I heard a few people question his ability last week when talking about him playing for England but I think yesterday may have even convinced them. He was playing against the best and did not look out of place at all.

Laurent Koscielny too I thought was superb. He was solid when called; he may have given it away sometimes but nearly every player did that once or twice however generally he was outstanding. He is getting better and better every game and I now believe he will be another great Mr Arsene Wenger signing.

A word for Manu Eboue too, I think people were nervous as Sagna was out, but Eboue stood up and gave it his all. He also gave it away here and there but in general, we would take the performance he gave. He did us proud. Well done Manu!

The Emirates was rocking and the boss and players came out to say how much of a difference it made. It was an epic night! I felt like I had played 90 minutes after the game, it really was special. I did take a few blows when the second goal went in but I will happily take them, I am sure I’m not alone! Jumping a few rows forward after the second goal wasn’t too clever either but who cares! We won!

The second leg will be very tough, we all remember what happened last season and Barcelona at home are completely different prospect BUT we have a lead and saw yesterday we can compete.

The season is hotting up! STILL FIGHTING ON FOUR FRONTS!!


I stupidly was too excited and forgot to take any videos but have got a good one from my mate James Howard. You can follow him on twitter on http://twitter.com/jamezjamez

Enjoy and Roll on Sunday!

STILL FIGHTING ON ALL FOUR FRONTS!
Posted by Akhil From Hounslow at 17:22