Newcastle Vs Arsenal - Says it all.... 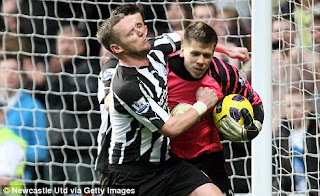 (wanted a picture of Nolan taking down WS but couldn't find one! amazing!)

First half, Arsenal were incredible, every time they attacked, I thought they could score. Second half it all changed, as most people will know!

The performance from the ref is something that has got everyone talking. I do love the way mangers get so many questions after dodgy decisions but if they are honest, they get fined so why are they asked these questions? Asking them is just really unfair.

There has been some talk on Sunday night about strange betting patterns the night before and up to the game. Odds apparently lengthened on Arsenal to win outright which is strange as you would think Arsenal would be clear favorites and odds may shorten rather then go the other way. This may mean some money came in for Newcastle to win or a draw which is hard to make sense out of.

Not sure how true it all is but the game may be being looked at and in particular a few decisions that just happened to involve Tomas Rosicky.

The decisions the whole day generally really got me wound up. Even in the first half, a few decisions went against Robin Van Persie but in all honestly, I couldn’t see much wrong.

The big talking point came when Joey Barton went in on Abou Diaby. My initial reaction was that Diaby has let himself down by his reaction and got a deserved red card. I still believe it was a red card (how can you not) BUT the tackle was a poor one and I can see where Diaby was coming from. Barton may have got the ball but it was an aggressive tackle which if you play in slow mo, you can clearly see Barton’s other leg that goes into Diaby. Barton’s knee really went into Diaby’s leg and in slow motion, you can see the impact; that could have caused a lot of damage. This is a player who has broken his leg and was out for a very long time and then got another bad tackle earlier this season that kept him out for months. Another bad injury could potentially end his career. Can you really blame him for reacting? (He shouldn’t have but you can see why he did, I wish he hadn’t though!)

I have heard some people call the tackle hard but fair however, I just do not agree. When I was asked about Wilshere's tackle earlier in season against Birmingham, I agreed it was a bad tackle (and a red card) and Eboue’s tackle in the same game which was a sort of scissors kick (one which Mr Wenger has called to be taken out of the game) was also a very bad tackle (even though he got the ball). So its not only when it’s against Arsenal do I think this but I really believe Barton tackle was a bad and aggressive one which could do damage.

The other offense I thought that occurred was when Nolan took our keeper out. Szczesny got the ball out the net and admittedly did hold it away from Barton however, what Nolan did was a red card offense. He raised his arms and if Diaby was off, then Nolan should have been too. Diaby was sent off for two pushes but in that incident Nolan also pushed Diaby a little (very soft I know but so where many other soft decisions..) and that could have been Nolan’s first yellow and his second was when taking down Szczesny. I thought Nolan was lucky to stay on the pitch.

An interesting thing that I have never understood is, after a goal is scored, the kick off is taken by the team that has just conceded so therefore the ball was Arsenals and our keeper had the right to take it from the net. If then he takes too long to get it back to the centre circle, he should be booked (by the ref) but here, he was just bullied and taken down to ground. This is a rule I have never understood.

I thought the second penalty was very harsh, I thought Rosicky was more putting his hands up because he was very close to the player and could not see and it is a bit of a reaction to keep your hands out for protection but regardless, I thought it was very soft. A lot of refs would not have given it. In terms of the match fixing here, I find it hard to believe because the decision was so soft that it could have gone either way.

The last free kick that was given was also soft, you see two players going for headers all the time and Rosicky did not lean into Barton as such but gave him a slight touch and the hard man Joey Barton went down like a fly. The finish for the fourth goal was fantastic though, a great finish.

On top of all that, Johan Djourou MAY have some ligament damage but a scan will tell us more, for our sake, I hope it is not a bad injury because in all honestly, WE NEED HIM!!

Looking back at this match fixing stuff; it’s a little hard to believe a player that was not even guaranteed to come on is involved in anything and with the decisions being so soft, the referee was the one who gave them and that looks more suspect to me!

Phil Dowd was in charge when Arsenal conceded a very late leveler at Sunderland when the allocated time was over and the ref let it go on for an extra 30 seconds and that does make you think about it a little…..

However, I do not believe any match fixing went on, I just think the standard of refereeing is just shocking at times! (Can you blame me…Saha goal other night and the decisions on Saturday).

There will be some people who disagree with everything I have said and may just call me biased. That may actually be true but football is a passionate business and football is my life so I am not even going to say sorry!

A big day or two with the Interpol stuff and the results of the scan for our best CB back this season.

Football is certainly a strange game.

Posted by Akhil From Hounslow at 01:39