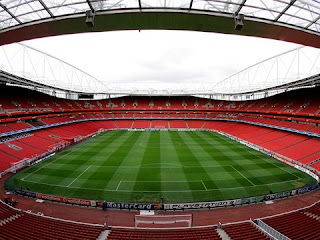 Waking up on monday morning to the sound of Stan Kroenke taking over arsenal gave me that element of surprise (specially at 7 am on a Monday Morning). It had been touted the day before, however i was too busy enjoying the three points that i did not spend too long thinking about the ownership battle.
After spending much of the day at the Mirror and the evening at the Arsenal Supporters Trust meeting, I must admit I learned a lot on the matter in hand.
Mr Kroenke has upped his shares as everyone knows and it seems like Mr Usmanov is not keen to sell his shares.
The Arsenal supporters trust DO NOT want to sell their shares and therefore are encouraging members not to sell theirs. If Mr Usmanov does sell his shares to Kroenke then Supporters may be under more pressure to sell their shares.
The argument is, Arsenal supporters should get a small say in how the club is run and be involved in the club and shareholders that have worked hard on getting their shares will not want to sell. This then means that Mr Usmanov is very important because if he does sell his shares, Supporters may have too as well.
I was most interested to know what will happen to the fanshare scheme as I have been apart of it since it was launched. The fanshare in my opinion, is a great way of letting supporters feel involved in the club and eventually can get a proper share. When the fanshare was discussed yesterday i found two things very interesting. One was that Stan Kroenke was in favor of the Fanshare scheme when it was first talked about and Secondly, when Mr Usmanov was asked about the fanshare, he was happy to give a few shares back to the club as long as Mr Kroenke does the same so the % of control stays equal and none of them lose out. My understanding is Mr Kroenke did not say NO but never really said Yes. The AST got shares from another source so it was not followed up but Mr Usmanov was happy to get supporters involved and that for me was a bit of an eye opener.
As it turns out, Mr Usmanov practically holds the key to if supporters keep their shares or not. Its only natural that supporters who own a share may have a different opinion to supporters who do not own a share and supporters on the fanshare scheme may also have a different opinion.
In my opinion and after attending the AST meeting, I do not think much will change in regards of the running of the club. The only thing that has changed is that Mr Kroenke has more shares in the club then he had before.
My opinion on Kroenke is positive as he has been around the club for a few years and seems to understand the values of the cub but i just have that small worry. What if, one or two of his five teams in USA have a turn for the worst and run into some debt, will Arsenal football club be used to pay off that debt? Something may be in the contract that says it cannot but i am always vary of any loop holes and do not want to see Arsenal being used bail out other teams in other sports. It may not happen like that but its a small concern i have (i know i am not the only one that has that concern talking to fellow supporters last night).
A few other issues from the AST meeting where that the AST want to ensure supporters who have shares that they do not need to panic sell. If some supporters think its now or never then this is not the case as there will be opportunities to sell shares at a later date if they wish too. The fanshare for example will always be looking to buy shares with the scheme growing and growing.
Stan Kroenke has been to three or four games in three years (came out at the meeting).
Formal offers will be made to shareholders, they can either accept or reject or just do nothing.
John Cross from the daily mirror gave a speech on the relationship between the media and Arsenal and much of that i wrote that in another blog from my own experiences at press conferences.
Something else that came out last night was about Robin Van Persie and Abou Diaby's debate at half time in the Blackpool game. I personally do not mind that at all. A few tweeters that i respect said last night that Robin is one to talk (because of what happened in Barcelona ie first yellow) but I am just happy someone said something because i was thinking the same thing. There seems to be a softly softly approach at Arsenal but this is the way i would prefer it to be. As long as Van Persie and Diaby have now kissed and made up (not literally) then i do not see it as a problem. I remember Ray Parlour saying that in his day, players were always rolling about in an argument (mostly Ian Wright!) but it was always forgotten after the event.
I was so pleased to see us get the three points and it was much needed! Massive game on Sunday against Liverpool and all we can do is win our games and see what happens.
You just never know.
Come on you Arsenal!!!
Posted by Akhil From Hounslow at 14:14