Jack Wilshere and the U21s / Stoke Away 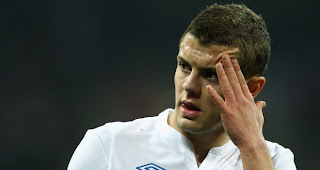 England wants Jack Wilshere but Arsene Wenger wants him to stay and have a rest.

Jack Wilshere has always said he will always want to play for his country and I would expect nothing less, but this is like when you’re a kid and you come home from school and play football with your mates at the park. If you play every day from Monday, come Sunday, your parents may say you cannot play as they are trying to protect you. I am not calling Jack Wilshere a school boy but at 19 and having played his over 50 games for his club, he needs to be protected by others who have the authority to make these decisions.

The England hierarchy must look at what is best for Jack Wilshere. Playing Wilshere in the under 21 tournament may mean he has a poor following season then a poor Euro 2012. Look at what happened to Theo Walcott; he went to the under 21s then had an average season then did not make the World Cup squad and surprise surprise, it was all his fault because he couldn’t cross and no one took responsibility for not giving him a proper summer off!

The fact that Wilshere played away in Wales shows his practically apart of the first 11 for the senior side and that is another reason why he should not be going to the Under 21s tournament. I may be wrong but I do not remember Wayne Rooney playing in the under 21s after he broke into the England team.

There has been an argument that it worked with Germany but Arsene Wenger disagrees. "I hear many times the comparisons with the German players that I find completely inaccurate," he said.

"First of all the German players when they went to the [Under-21] tournament they had not played the number of games that Wilshere has played this season.

"Secondly in Germany there is a massive winter break before the World Cup and that allows everybody to start after the break well rested, in February. So you cannot compare the two situations”.

Even the comparisons with Spain are similar. They start their season later and that means their pre season starts later too.

If Wilshere goes to the under 21s then he may not be ready for the start of the season and may miss the qualifiers too.

The England argument is that this tournament gives you some real big tournament experience but I beg to differ. Jack Wilshere played 180 minutes against Messi, Xavi and Iniesta this season and that in my opinion will give him the bigger experience of playing against the BEST in the biggest club tournament there is.

People want Jack Wilshere to get a winning mentality and playing in the under 21s is apparently the answer; er, who says England are going to win? It could even have an opposite affect if England go far but do not win it. We saw what happened with Arsenal losing the Carling Cup final as the team just collapsed and the mental blow of losing the final was arguably something the players never recovered from.

What happens in the summer happens, but Arsene Wenger has said he will never tell his players not to play for their country but wants everyone to be responsible and do the right thing.

Every Arsenal supporter is proud of the way Jack Wilshere has stood up and been counted for and every England supporter should be too. Every supporter is proud that Jack wants to play in every tournament for club and country but he needs to be protected. Can a lad of 19 play a full season off 50 plus games, then a under 21s tournament, then play a full season for club again along with England qualifiers and friendlies then go to play the Euro’s with the senior team? Surely that will just increase the chances of a burn out. Wilshere is currently in the squad of 40 but that will be cut to a squad of 23.

However, Wilshire’s immediate thoughts will be on Arsenal’s trip to Stoke on Sunday and that could see the same midfield as the one against Manchester United of Song, Wilshere and Ramsey. This is a particular big game for Ramsey as this is where he suffered that awful injury last February so this is bound to be an emotional game. Just like when we went to St Andrews with Eduardo, we will be there for Rambo at Stoke and I am sure the One Aaron Ramsey chant will be in full flow.

With Samir Nasri and Cesc Fabregas out, the creative players have to step up and Ramsey and Wilshere are a big part of that along with Robin Van Persie off course (who was voted Arsenal player of the month for the month of April by supporters).

There has been a history with Stoke City over recent years and the game may not decide the title like we wanted it too but is still one we are desperate to win. So let’s win it!!

Posted by Akhil From Hounslow at 00:08