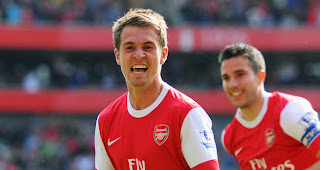 Finally we got a victory over Manchester United. Even though the title race may be all but over; it was still sweet.

It was a special day and moment for Aaron Ramsey who scored the winner and after the last year or so he has had and who would take that moment away from him.

I heard a few people say on my exit from the stadium about whether we still need Cesc Fabregas and my opinion is WE CERTAINLY DO. He may not have had the best of season however he is still one of the best players in the world. Keeping the squad together (maybe get rid of some deadwood) and adding a few players is more the way to go.

I think the last three games are just about getting nine points and ending the season strongly and Stoke away for a number of reasons will be important. It will be a big day for Aaron Ramsey and I make the bold prediction that the one Aaron Ramsey chant may be sounding around just like the Eduardo one did at St Andrews the year he returned there.

So roll on Stoke away and roll one another three points.

Posted by Akhil From Hounslow at 23:29