Thomas Vermaelen is back! 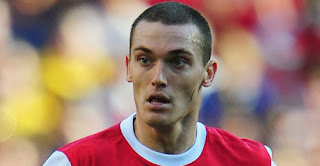 Thomas Vermaelen may make his long awaited return to the Arsenal side this Sunday and how badly has he been missed?

Thomas Vermaelen reputation seems even better over the last eight months even thought he has not played BUT will need time to get back into the groove as they say.

Vermaelen had a superb first season and scored some important goals in important matches and his return is welcomed.

To have him fit and playing a few games before the summer is a massive boast and with a good pre-season, we hope he will be fit and firing next season.

Arsenal have certainly fallen short this season in terms of crossing that finishing line but have played some top football a long the way. Newcastle away in the first half (obviously), Birmingham on new years day, Chelsea at home, Barcelona in the last 15 minutes and Manchester United a few weeks ago are just some examples.

There has also been some tweets flying around about Cesc Fabregas. Tweeters have said that this could be his last game at the Emirates and even though it well may be, I prefer not to think about that and just win the game and hopefully Cesc will play and play well and off course I hope he is here for years to come because he is a world class player.

Not much else to say apart from lets win on Sunday!

Posted by Akhil From Hounslow at 18:50