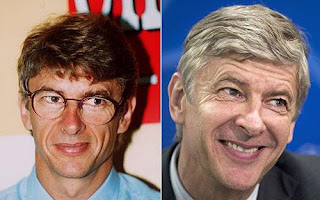 Today is Mr Arsene Wenger’s 61st birthday and even though he will keep celebrations low key, I am sure he will say that three points at City is what he really wants.

He also hit the 800 games mark this week and personally, I am so pleased he is here. ‘Arsene who’ came here in 1996 as an unknown Frenchman and 3 Premier League’s and 4 FA Cup’s later, the man is still here.

He may not be liked by certain managers but you look at the respect shown by Sir Alex Ferguson and you see how well respected Mr Wenger is in world football. Let’s not forget how Real Madrid has tried to sign him on a number of occasions.

I hope we get to celebrate many more birthdays with Mr Wenger as Arsenal manager because in Arsene we well and truly trust.
Posted by Akhil From Hounslow at 15:24