Great Week For The Arsenal,Still Fighting On Four Fronts... 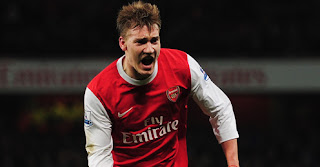 Great week or so, a win at Leeds, a hat trick By Robin Van Persie then winning a Semi final to confirm our place at Wembley in the Carling Cup final.

Even if at half time we were not so sure! The tension around the concourse was something unique and the way the Bendtner’s goal was celebrated sounded more like relief then celebration! What a goal it was though, great ball from Jack, Superb first touch, classy turn and fantastic finish. After that, we felt calmer and knew the goals would come.

Arshavin is another strange one. He has admitted his confidence has been low recently and he finds it hard to make the right decision when on the ball. Despite all that, he got two assists and even won the corner for the second goal. That may not be enough for some people and even Andrey himself, but his two assists need to be taken into account. I am no expert, I do not know what will happen to Arshavin (if he will stay or go at the end of the season) but when he plays, all we can do is support him. His situation certainly is a strange one but in a season where we are fighting on four fronts, we need all our players playing well.

So the first trophy of the season is nearly at a conclusion and we are in the final. Win this and that’s one down and a possible three to go!

The gut reaction after Birmingham’s victory over West Ham was we can win the final for Eduardo. Eduardo will be a player that is always close to my heart and I am sure most Arsenal supporters feel the same. Winning the game is important for many reasons. We need to win the game for ourselves firstly but the Eduardo stuff does come into it. We do want to win this game and dedicate some part of it to Eduardo. He will always be the player that could have been in my eyes.

I also learned that Theo Walcott is not good at games like Football Manager. I recently finished a season where Theo scored a double in the Champions League final and I was lucky enough to tell him that after the Ipswich game. I also reminded him that he already has a goal for Arsenal at Wembley and has a chance of getting another and he just smiled, he is just too modest!

Finally and thankfully Bacary Sagna is okay after the clash of heads, he went to hospital and has returned home which is fantastic news and for me, he is a huge part of our team and we need him playing for the rest of the season.

Time for the cup now and I expect many changes but think it is important to win and keep going. The momentum is with us and we must keep it going. Perhaps even our defensive record and recent clean sheets have gone un-noticed but that may be because people rather talk about Grey and Keys! (There was such great football this week yet all I saw on the news channels were about Grey and Keys!)

Roll on Sunday and lets get into the hat for the 5th round! Come on you Arsenal!

Posted by Akhil From Hounslow at 14:26