Three Goals And A Clean Sheet but Leeds Is All That Matters Now. 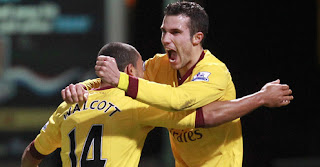 With all the madness going on at Upton Park, many of us thought that they may just have one of those days and play out of their skins. Sadly for them, it did not happen but for us, we got the three points, we scored three goals and got a clean sheet! What more can we ask for?

We also saw Robin Van Persie look as sharp as he has looked in a while! Cesc looks better every game he plays and Theo also had a very good game. Jack Wilshere was superb and him along with Cesc and Alex Song were practically untouchable in the midfield. Sammy Nasri got involved in most things and kept his good form up too.

My Theory about being more up for the League games proved there could be some truth in that too!

It was a good day in the office but its just one game. Attention turns to Leeds in the FA CUP now. This should have been a week off but us being the Arsenal, made things slightly more complicated then it had to be! Regardless, as long as we win the game, we are in a good position.

For me, its vital we have a good run in the FA CUP. With Barcelona coming in the Champions League, having the FA CUP in our lives just helps as it may even take some pressure away from the Barcelona tie. The more chances of silverware we have, the better. Winning at Leeds for me is a must, I will be a very disappointed man if we go out the cup.

The FA CUP is special and needs to be respected and i think the FA CUP could be an important part of our season. Winning the FA CUP would mean a good season and I hope we are up for it as we are in league games.

Cant wait for Wednesday! Come on you Arsenal!
Posted by Akhil From Hounslow at 01:33