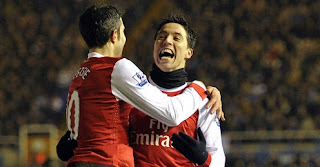 I Must say, on a personal level i am thrilled to come away from St Andrews with three points and three goals. The memories of sitting in the stands last season was going through my mind at half time when we were 1-0 up and i was praying for a second goal.

At St Andrews, there are corporate boxes right behind us and most of them have home fans in, so therefore, last season, we could see them celebrate at the final whistle and that memory stayed with me, so it was so nice to get some sort of payback.

Off Course, the Eduardo day is still in our memories and hearts too so to get the victory was vital.

The chant of the day for me was 'We got Cesc Fabregas......Uve got Lee Bowyer'! and that was sung quite a few times during the game and after it!

But now that game is over and we move to the next game and that is another huge game. Every game seems huge at the moment and i hope a similar day to Chelsea is what we get. With the team playing with freedom and pressing the ball as well as they did last Monday and off course the fans playing there part because everyone was signing their heart out last Monday.

A win against City would mean an amazing Christmas period and another win in a big game would do even more for our confidence.

Come on you Arsenal !
Posted by Akhil From Hounslow at 20:29