One good performance away from a Carling Cup final 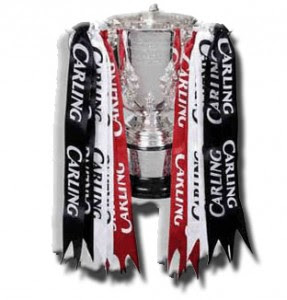 So here we are, one game away from a final which can see the end of all this 'five years without a trophy rubbish'!

When i visited Old Trafford earlier this season for the Arsenal game, I spoke to a gentlemen (a Man Utd fan) who told me not to let anyone tell me the Carling Cup is 'only' the Carling Cup. He reminded me that Manchester United won it last year and this year are going for the title and off course Jose's Chelsea first trophy was the Carling Cup.

I am not sure if it is just me but i can see a slight difference in the team and the belief seems to be stronger. Beating Chelsea and seeing Man City come and park the bus has certainly increased the belief and the victories against Birmingham, West ham and Wigan have increased it further.

Losing against Ipswich is NOT an option. We must win and we must go to Wembley in Mid Feb.

Come on you Arsenal! lets do this!!
Posted by Akhil From Hounslow at 22:49