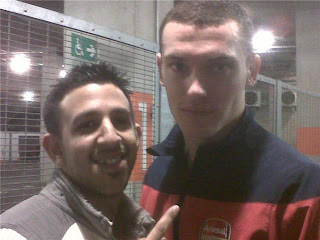 Arsenal have been hit by a massive blow that Thomas Vermaelen will remain on the sidelines for a while longer. Mr Wenger was speaking at Arsenal's annual AGM today and also added he does not know when Thomas will return.

This for all of us, is very worrying. We all know that at times our estimates for injuries are not quite accurate but here we do not have even a possible date, not even a rough one, and that shows this injury is a bad one. No one will forget how Thomas Rosicky's injury was 'short term' and was said to be out for two weeks which turned into 18 months.

We hope Thomas will return soon but i cannot see it being in the next month or so at least. Vermaelen who had a great first season will be missed greatly as he was seen to be the Senior head at the back and is even seen by many (including me) as a future Arsenal captain.

My thoughts are with him and I hope he can return as soon as possible.
Posted by Akhil From Hounslow at 12:52