Another Great Away Trip 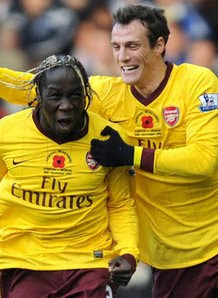 Away games are starting to really excite me, certainly when I actually make the trip. I will confess that even though I have been going to every home game for several years, away games were slightly rarer. I did travel to away games but no way as frequent as I do now. I felt I was a bit of a jinx because quite often I came back disappointed in terms of the result. This season has been totally different. We seem to be better away then at home and the stats back this up as Arsenal has the BEST away record in the Premiership.

One thing I want to do is give so much credit to the fans that travel to away games. The away support is amazing and they just never stop. I like to think I am quite vocal and do try and sing my heart out and often people tell me that they could hear ‘my’ song because they are a few in particular that I love and sing even in my sleep! But I have learned these songs from the away supporters who have been going for years. They have taught me a lot in recent years and they deserve a lot of credit.

One fan in particular, for me sang the song of the day. When we, the Arsenal fans were chanting ‘We got Cesc Fabregas, we got Cesc Fabregas’ this fan then added, and ‘Uve got Phil Neville, Uve got Phil Neville’ and this for me is genius! Someone may have sang this before but the timing of when this fan started the chant was perfect then the rest of the army joined in, much to the annoyance of Everton fans as they were unhappy with Fabregas’s tackle/block when he was chasing the ball down earlier. That is the difference between home and away supporters because here, one man started the Phil Neville chant and hundreds of other fans joined in.

Last week, I may have been a bit harsh on home supporters; after all, I am one of them. I said it was the fans that must do or change something to improve the home atmosphere but after thinking about it more and listening to other fans telling me their opinion, I have seen that perhaps its mission impossible for fans UNLESS the club lends a hand. People tell me that because of the different pricing, they are no longer sitting with their friends from Highbury and cannot create the chants like they could then. Some people have called for signing sections and some people have said, once the club wins a trophy, the atmosphere around the place may change. If I offended anyone last week then I am truly sorry, it was not meant to be any sort of a attack on anyone, the passion and disappointment of losing to Newcastle just got to me more then ever!

The trip to Merseyside was good, local people were quite nice to us as we walked around the streets of Liverpool. Once in the ground, off course the banter started but that is what you would expect.

I thought we did really well to get the three points and played as a real team. We started and ended the game a bit on the ropes as Everton had chances but generally, we were good and could have added to our two goals. If only Sammy Nasri had put his chance away because he deserved a goal after that burst of energy, what a player he is turning out to be!

How does it go?

The only small issue about that song is, I will be at Wembley for England Vs France on Wednesday night and as an England supporter; will I be able to stop myself from signing the Nasri chant? Only time will tell!

Now roll on the visit from them lot down the road and another three points is vital. We must ALWAYS beat Spurs! Chelsea look like they could drop points because of all their missing players (mind you we missed quite a few earlier in the season) so we must take advantage if they drop points as we did over the weekend.

I will have a wild guess and say the atmosphere may just be quite electric on Saturday despite the early kick off and I am sure everyone will be behind the team.

Once again, sorry if I offended anyone last week but I was really pleased with the debate that got going on the comments section. I thought every comment was well thought out and all were valid points.

Thanks for all the kind and supporting messages since the launch of this blog; I was quite touched with them all. Great thing about blogs is they only are opinions, and everyone has an opinion. So feel free to disagree, I even tend to disagree with myself after I have said something so that’s the beauty of blogs and just sport generally.

Come on you Arsenal!
Posted by Akhil From Hounslow at 11:53