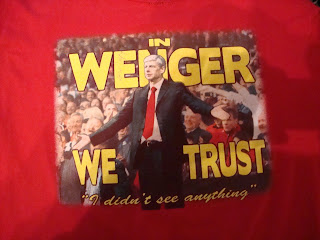 My latest post is once again about the Saturday just gone and in particular a special moment after the game (West Ham).

The game in general was a nervy one! When ever you enter the last five or so minutes with the score line still level, the nerves do get the better of you. The fact that Arsenal got the winner shows the desire and hunger that our manager often talks about. After winning at Eastlands the other week, all the hard work would have been undone, so to take all three points was essential.

The Headline about class is for another reason however, and after the game I saw even more class from our manager yet again. I have always been a great follower and believer in Mr Wenger and ever since 1996 I have been hooked. The way he run’s this football club is second to none and without him I hate to think where the club would be now.

When exiting the stadium I saw Mr Wenger’s car and he had stopped for a few fans that had spotted him. He was signing autographs for these fans and I walked past. He started to move off but as his window was still open I congratulated him on the win. I have met him a few times recently as a fan and also as a professional at his pre match press conferences. He looked at my t-shirt (In Wenger We Trust) a few times as it has his face on it! As he was moving very slowly, the few other fans had turned the other way and I was literally left with my idol on a very quiet road. I was walking at the same speed as his car (quite slowly) and I asked Mr Wenger ‘how he was?’ He replied by saying he is ‘fine’ and asked ‘how I am!’ I then said, ‘I noticed you looking at the shirt and if I had a pen I would get you to sign it but I do not, so next time’! His response is what really made my day. He stopped his car, put his handbrake on and said ‘wait’ he then checked his dashboard, his flap thing which blocks the sun above him and also checked the passenger side of the car. I then told him not to worry and he then got a pen out of his jacket and signed my shirt for me. I then asked him how his Birthday was and he said it was good and that he just invited some friends over. I then shook his hand and we went separate ways.

As I was in astonishment, the quotes may not be 100% accurate because I was in my own world after this but that was pretty much the most of it.

I knew this was a special moment and a moment of such class. Mr Wenger could easily have been polite and smiled but not got his own pen out! I am not sure how many other managers or even players would have done what Mr Wenger did.

I ran into John Cross from the Daily Mirror just after and even he was keen to listen to my special moment and was equally in admiration from the class shown by Mr Wenger.

He certainly made my day and after such a fantastic week and three clean sheets, this was a perfect way to end a perfect week.

Roll on this week! Come on you Arsenal !
Posted by Akhil From Hounslow at 13:06