Going Top, A Familiar Face And A Quarter Final 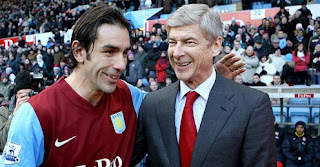 ‘I hope we stay top for more then two hours’

Well, it was only two hours Andrey, but the fact that we got to the top is a positive. We all know what happened last week so it was vital that we take all three points and go top of the league, even for a few hours. Being two up at half time and then conceding (even though we know there was a offside there) was quite concerning but the team showed some character to keep going and not let what happened seven days ago affect them.

It was still a bit too easy for Villa to score for my liking, however, after the week we had, a win is what was needed and we got it.
It was nice to see Mr Bobby Pires too, I love the way he gave most of the players a hug in the tunnel then went to Mr Wenger for a handshake, he showed real respect for our club and I hope he has a good season because after what he has gone through, he deserves it.

Now the focus turns to what seems like quite a big game at home to Wigan in the Carling Cup (who would have thought that a few years ago). The Carling Cup has certainly changed in regards to the way we look at it. As people say, one trophy and more can follow. A trip to Wembley will give our players some added confidence and it would be nice to make Wembley our second home this season with all three major Cup finals there.

Not sure about anyone else, but I am quite looking forward to the Carling Cup game on Tuesday night. Tickets are well priced and availability was there for ALL Arsenal fans. Tickets were on general sale and were priced at £10 and £20 so their can be no complaints there (considering how much they usually are). There has been a lot said about the atmosphere but I reckon there might be quiet a decent atmosphere on Tuesday night.

If you’re down there, do make some noise! I know I will!

Once again, the away fans were superb yet again at Villa Park and on a personal level, I can’t wait to go to Old Trafford in a few weeks because along with the atmosphere and the way we have been playing away from home, I really fancy it!

But for now, its all about Wigan on Tuesday then off course Fulham on Saturday, a chance to sort our home form out so to speak.

Come on you Arsenal!
Posted by Akhil From Hounslow at 14:54