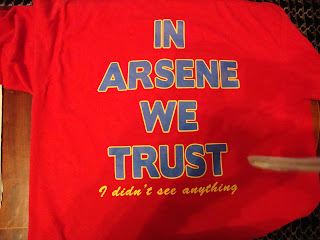 "Everybody has a different opinion in this league and nobody is a prophet," said Wenger.”

"We live a society where everybody knows everything and it looks like it is a shame to say I don’t know.”

"I personally don’t know who will win the league. I have managed 1,600 games so if Nani knows he must be 1,600 times more intelligent than I am.”

Another classic quote from the Gaffer, this got me thinking, there have been some great Mr Wenger Quotes and if any of you follow me on twitter, you may remember I tweeted many of them one evening but if you didn’t see them or forget, here is my top 20 Arsene Wenger Quotes again

19. "Nobody has enough talent to live on talent alone. Even when you have talent, a life without work goes nowhere."

17. “Is the title over or not? I don't believe so. If everyone is right about the championship, then let's stop, give them the trophy and then start again.”

16. [Upon being asked what he does with his spare time] "I watch football."

12. [After the Arsenal fans booed a 1-1 draw with Middlesbrough in November 1998] "If you eat caviar every day it's difficult to return to sausages."

11. [Upon being asked if he had received the apology that Sir Alex had announced he had sent to Wenger] "No. Perhaps he sent it by horse."

10. [On losing the lead of the league in November 2004] "It's like a child who is used to having ice cream whenever he wants. When it doesn't come when he asks he tends to get confused and nervous."

9. [On Arsenal's recruitment policy] "If I give you a good wine, you will see how it tastes and after you ask where it comes from."

8. "If you have a child who is a good musician, what is your first reaction? It is to put [them] into a good music school, not in an average one. So why should that not happen in football?" - September 2009, in response to Uefa president Michel Platini and Fifa president Sepp Blatter's respective claims that the top clubs' pursuit of young players was akin to "child slavery" and "child trafficking".

7. "A football team is like a beautiful woman. When you do not tell her, she forgets she is beautiful."

6. [In response to Sir Alex Ferguson's claim that he possessed the best team in the league despite Arsenal winning the title in 2002] "Everyone thinks they have the prettiest wife at home."

5. [After Jose Reyes announced he wanted to leave Arsenal] "It's like you wanting to marry Miss World and she doesn't want you. I can try to help you but if she does not want to marry you what can I do?"

4. [On Emmanuel Adebayor's stamp on Robin van Persie] "I watched it when I got home and it looked very bad. You ask 100 people, 99 will say it's very bad and the hundredth will be Mark Hughes."

3. [On Jose Mourinho after the then Chelsea boss accused him of being a voyeur] "He's out of order, disconnected with reality and disrespectful. When you give success to stupid people, it makes them more stupid sometimes and not more intelligent."

2. "I tried to watch the Tottenham match on television in my hotel yesterday, but I fell asleep."

1. [In 2003] "It's not impossible. I know it will be difficult for us to go through the season unbeaten. But if we keep the right attitude it's possible we can do it."

There you have my top 20 quotes, there are plenty more but I chose my favourites ones. The reason why my number one quote is number one is because to go unbeaten then tell people you knew you could do it is one thing, but to say you can do it, and then actually do it shows class. Mr Wenger believed in his team and he was spot on.

Merry Xmas to all celebrating and I hope you have had a wonderful day.

Posted by Akhil From Hounslow at 19:25