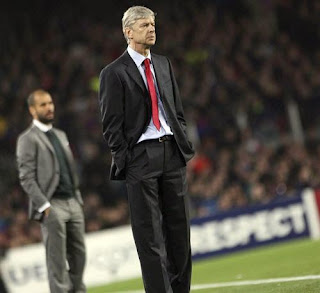 Losing at Old Trafford and getting Barcelona in the Champions League…..AGAIN!

I think it was written in the scripts that Arsenal and Barcelona would be drawn together. I am not sure about you, but this felt like a few weeks ago when the World Cup bid went elsewhere, it was a case of you just knew what was going to happen or not going to happen in that case. We made a huge clanger in not topping our group and it seems like we have paid the ultimate price.

Lets be honest, no Arsenal fan, include myself, can honestly say we will beat Barcelona, but we can be positive and you never know, but I think most fans will be a little fearful playing Barcelona.

The positives from last season are that we played Barcelona with half our side missing. From the top of my head we went to the Camp Nou without Gallas, Campbell, Song, Arshavin, Van Persie, Fabregas so if we go with a full strength team, we cannot be any less confident then last season.

If I am truly honest, for Arsenal to win, we need Barcelona to have an off day however; I’m all up for hoping for one of them! My headline reads football is becoming a bit predictable but an Arsenal win would really bring that unpredictability back.

As a supporter, all we can do is support our team so the draw is done and I am looking forward to the tie.

If nothing else, least we get to have a few days in the sun?

Anyway, Barcelona can wait, Stoke is much more important as it’s the next game! Manchester United away was hard to take, I seem to do that to myself a lot, get my self so hyped up then it ends in disappointment. The away concourse before the game was buzzing as always when Arsenal are the visitors and the excitement was there for all to see. The away section kept singing and even with a dodgy crackly voice, I tried to join in, regretted it in the morning though! United’s goal had an element of luck but they did create more chances and were more efficient as Mr Wenger put it and therefore won.

Stoke on Saturday is a big game and we can recover from Monday night. The war of words have been there for all to see between both managers and after the Ramsey incident, games against Stoke will always be highly anticipated. With Chelsea and Manchester Untied playing each other, some ground can be made and we must do it.

Come on you Arsenal.
Posted by Akhil From Hounslow at 20:55