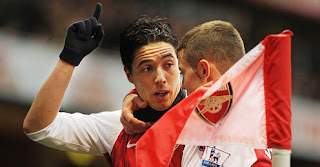 There are no easy games as people keep telling me and this season has proved that. Apart from the early season games against Blackpool and Bolton and the two early Champions league games, nearly every game has been quite tight.

The away games this season have been great but have been tight too as games at Everton, Wolves, Blackburn and Villa proved. Home wins against Birmingham and West ham have also been close and we can certainly add Fulham to that list.

The Fulham game was certainly interesting and there were a few talking points. Sammy Nasri kept his fine form going and is on top of the world right now. Even Rio Ferdinand on twitter is calling him Samir ‘the Angle’ Nasri and that’s because of his two amazing goals against Spurs and Fulham from tight angles. Nasri was outstanding once again and I am really enjoying watching him play and even more so really enjoying singing his chant!

The Fulham goal angered Mr Wenger because there was a clash of heads and the game was allowed to continue and the Fulham front man scored. As we did go on and score the winner, I will not dwell into their goal to much but can see why Mr Wenger was upset.

What was slightly annoying was a certain Mark Hughes, who we have a bit of a history with. I saw all game Mark Schwarzer taking his time with goal kicks and when Kamara was taken off, the score was 1-1 and he practically went off at a snail’s pace and Mark Hughes did nothing to rush him. After Arsenal went 2-1 up, Hughes was showing his watch to the referee and wanting Arsenal to hurry up; double standards or what? He wanted Fabianski to kick the ball out quickly but is happy for Kamara to take his time when coming off the pitch. What a joke! In fact, when Kamara came off, Hughes was clapping! Taking your time when your winning or holding on to a draw is apart of football, however, to do it yourself then complain when you think others are doing it in the same game is just wrong! Personally, I did not think Fabianski took very long to take his goal kick (I wanted him to take even longer!) but for Hughes to have a problem with this is just laughable.

Off course, the legend that is, Thierry Henry was at the game and I must admit I started doing a Kamara after the game when walking out just in case I get a sight of our record scorer. I did see Mr and Mrs Wenger leaving the ground and Mr Wenger looked very pleased, he was asked about his January actions and I will not be surprised if he does bring someone to the club in the transfer window. It was nice to see Mr Wenger with a big smile on his face; it proves this week has been a good one.

On my way to the Tollington, a flash dark coloured BMW X6 was stuck at the traffic lights and it was none other then Thomas Vermaelen (he was not driving in case you are wondering), a few young kids ran up to him and he was very welcoming and opened his window and signed their shirts. I shouted ‘we can’t wait to see you back Tommy’ and he replied with ‘I can’t wait either!’ and how nice it would be to see him back in the Red and White of Arsenal again.

So we got the three points we wanted and went top of the league. Oh I love football and oh I love Arsenal!

Now focus turns to a huge game mid-week and a win will see us go through to the next phrase of the Champions League then we have a trip to Old Trafford.

Roll on the week ahead! Come on you Arsenal!!
Posted by Akhil From Hounslow at 13:04