Confidence and Support is a massive aspect of Football 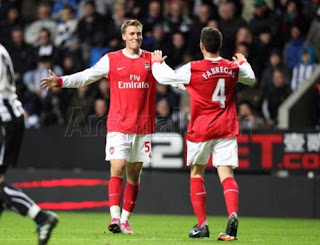 Last year I heard people say Fabianski and Bendtner are not good enough for Arsenal and Walcott should be sold and ‘who’ is Szczesny?

First I will tackle the goalkeeping issue. I know a decision cannot be made on a keeper after just a few games let alone just one but Fabianski has proved that he is a better keeper then everyone thought he was. He flapped often and made mistakes in nearly every game he played yet Mr Wenger has always remained confident in Fabianski and continuously said that the Fabianski in training is one we are yet to see. Since the WBA game, Fabianski has played in every game (apart from the Carling Cup) and has played well. I went into the issue of Fabianski in my previous post but I am using him as an example of someone who was not always supported but is trying to turn it around and is playing quite well of late.

The goal keeping situation was the most debated subject during the summer and some fans wanted a keeper that was ready and some wanted a short term fix with Szczesny being the long term number one. Szczesny looked solid against Newcastle. He came for crosses and long balls and caught them well. He punched well and got good distance on them, something past keepers have not have done consistently. He stood tall and seemed like a presence in goal and made some good saves. The potential was certainly there and I will be VERY upset if we lose him next summer as his contract is up. If he is this good at the age of 20, imagine how good he can be at the age of 25!

Theo Walcott is another player that people were getting frustrated with last season. Theo has always got support from fans however; the minority of fans were questioning his development and were questioning whether he will be the player we want him to be. He was left out the England World Cup squad for whatever reason but he has worked hard, kept fit and come back firing this season. He already has six goals and that’s despite being out injured for six weeks. Theo has frightened defenders with his pace and has developed his game this season and added goals. He can only get better and I for one am so pleased he has proved some doubters wrong this season with his fantastic performances.

Finally, we come to Niko Bendtner. A man you either love or you hate. Even today, before his goal, some people tried to explain to me why he is not good enough for Arsenal, however, I disagree. Last season, if it was not for Bendtner, we may not be playing in the Champions league. The song about ‘Thursday night, channel five’ which we were singing at Man City fans may have been sung at us! The winner in the last minute against Wolves and Hull were vital, the goal at Stoke got us back in the game which we went on to win and he scored in many other games. He even gave us hope at in Barcelona for a minute or two at least! When you play only one striker, you still need a total of three strikers but not all three are going to be the same. In Van Persie, Chamakh and Bendtner, we have three very different strikers. Chamakh and Bendtner are more similar but do differ slightly on the pitch. If you look at our third choice striker, if all three are fit (who you would assume is Bendtner at the moment) compared to others then you see how valuable he is. He scored more goals then most third choice strikers last season and you will never get a 30 goal striker as third choice because that striker will simply want to leave. I am not saying Bendtner will be a 30 goal a season striker but to win competitions, you need a squad and Bendtner is very much apart of that. Saying that, I believe Bendtner has the quality to be a 30 goal a season striker and be first choice if he works hard but at the moment he is still an asset to this club and I firmly believe that he will get better and better and give Chamakh and Van Persie a run for their money for game time.

Once again, I stress, these are just my opinions. I am one to always support who ever plays and the whole squad certainly have my backing and also my faith and confidence in them as a whole.

This has been a great week and we want it to carry on further on Saturday.

Come on you Arsenal!
Posted by Akhil From Hounslow at 10:45